The time you spend teaching your child to ride a bike are moments that every parent looks back on with fondness, remembering their child wobbling off down the road, all smiles, with their newly found independence.

The age you decide to teach your child to ride should depend mainly on their development speed. Different motor skills and balancing techniques will develop at various rates in individual children, so it’s important to wait until your child is ready.

In this Dynacraft bikes review, we look at the Magna Major Damage BMX model for boys to see if it could be the ideal bike for your kid to learn on.

Quick Navigation
Who Is This Product For?
What’s Included?
Overview of the Features
Brightly Colored
Perfect Size for Newbies
Beginner Brakes and Lightweight
Detachable Training Wheels
How to Use This Mountain Bike
Alternative
Conclusion 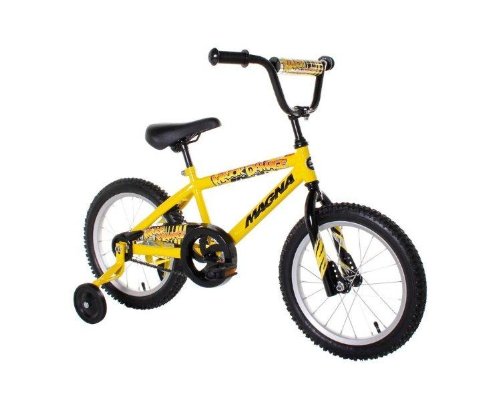 Founded in 1984, this California-based company is the largest privately held bike, scooter, and ride-on supplier in the United States. They aim to bring innovation, technology, and fashion to the market. The Magna Major Damage Bike is a brightly colored, one-speed BMX bike that is specially designed for boys.

Who Is This Product For?

This Dynacraft bikes review, in particular, is about a boy’s BMX, but we feel it would be perfectly suitable for a boy or a girl of around four to eight years old. It comes with the option of having stabilizers on it, so it is an ideal first bike that your child can learn on.

In fact, they can still enjoy riding this when they’re confident enough to ride on two wheels—that is, as long as they are under the recommended weight limit of 81 pounds.

The bike will require some assembling, so you can expect it to come in several parts inside the box. You also need to have some basic tools available. Also included with your purchase are instructions telling you how to put the bike together, as well as a one-year warranty on the bike’s frame and fork.

Overview of the Features

We have tried and tested several bikes on the market and found that this can be a wise choice. Here are some of the reasons why we love this bike:

This bike comes in an awesome bright yellow color, which means your child won’t be missed as they tear up and down your street playing and racing with their friends. As we said previously, this bike is marketed towards boys, but there’s no reason why your little girl wouldn’t also enjoy learning on this Magna “Major Damage” set of wheels!

The bike has a 16-inch frame so you should measure your child to check that it’s a good size for them before purchasing. A 16-inch frame will be ideal for a child between 43 and 48 inches tall. The average age for a child to learn to ride a bike will be around five years old, and with the average height of a five-year-old being 41 to 44 inches, this bike is sized perfectly to time with this.

More specifically, however, you should measure your child’s inseam (this bike accommodates an 18- to 22-inch inseam), as you want your child to be able to put their feet on the floor comfortably from the seat. The seat is adjustable to grow with your child. Ideally, your child will be at the lower end of the height range when you buy it for them so that it will fit them for longer.

The bike has coaster brakes, which means that it brakes when your child backpedals. This type of brake is generally preferred for learners. That’s because having a hand brake is too much for brand-new learners to take in all at once. The bike is also a good weight at just 24 pounds, which is about the market average for a child’s bike.

The training wheels are detachable (like most), so once your child has gained some confidence, then they can learn to ride a bike without the extra support. The BMX frame will be favored by many children that want a sportier-looking bike, and they take to riding really well, then this would also be the perfect bike for them to take to the skate park and start to learn some simple tricks.

How to Use This Mountain Bike

Before the bike is used, it will need to be assembled. Hence, be sure to order it ahead of time if you want to have it ready for your kid to ride on the allotted present-giving day! Other Dynacraft reviews have mentioned how easy the assembly is, with the average assembly time being just 30 minutes.

Clear instructions are included in the package, but one tip we will give you is to pay attention to which way you are putting the wheels on!

If you have a little girl who likes princesses and unicorns, then it may also be the case that she likes pink and you may want something that appeals to her a bit more than the bright yellow Major Damage Bike. In this case, Dynacraft also offers the Starburst BMX Bike, which comes in white, pink, and purple in color. 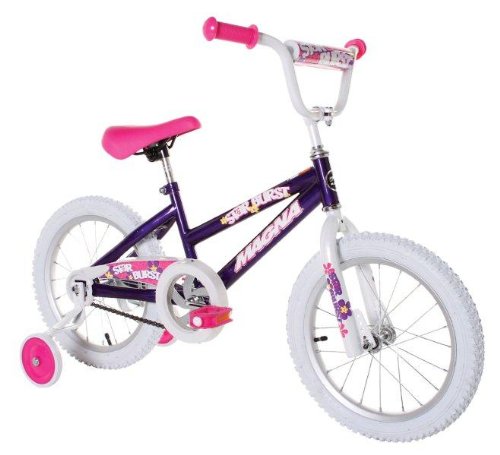 The mainframe is purple, the wheels and handlebars are white, and the seat, pedals, and grips are matching pink, making this bike really pretty to look at (for some!). It has a 16-inch frame, so it will suit four- to eight-year-olds fitting the same heights.

As expected, this bike also has an adjustable seat and adjustable stabilizers to make cycling increasingly hard for your child. Then, you can remove them when they are ready to cycle on their own. The weird thing is that this bike is three pounds heavier than the Major Damage version, and we just can’t figure out why!

If your little girl loves all things pink, then there is no doubt which bike she will prefer. However, we think the bright yellow Major Damage BMX bike is much better overall.

The Major Damage bike is more suitable for boys and girls alike, so you could potentially pass it down to a different gender sibling. We also think that three pounds is a pretty hefty weight difference, especially considering that a small four-year-old will have to lift the bike up to standing every time they get on and off it.

Aside from the lighter weight and the gender neutrality, we also really love the extra safety that comes with the Major Damage bike. Your child will be so much easier to see when they are out learning and playing on their new bike because of the bright color.